U2 Goes For The Money Grab, To Reissue Achtung Baby

I’m stoked by video, audio and unreleased music from that era but i’m not stoked when people talk like this and treat their customers like ATM’s. I think someone has lost the plot.

Its likely there will be separate reissues of Achtung Baby and Zooropa, along with a deluxe box set that incorporates both albums as well as video and/or audio from Zoo TV. “There will be multiple formats,” says U2s manager, Paul McGuinness. “If you pile a lot of extra material and packaging and design work into a super-duper box set, there are people who will pay quite a lot for it, so you can budget it at a very high level and pump up the value.”

via U2 Go Back to the Nineties With Massive Achtung Baby Reissue | Rolling Stone Music.

The Global Drug War Is A Failure

The Drug War is a failure. Jimmy Carter in the New York Times:

The report describes the total failure of the present global antidrug effort, and in particular America’s “war on drugs,” which was declared 40 years ago today. It notes that the global consumption of opiates has increased 34.5 percent, cocaine 27 percent and cannabis 8.5 percent from 1998 to 2008. Its primary recommendations are to substitute treatment for imprisonment for people who use drugs but do no harm to others, and to concentrate more coordinated international effort on combating violent criminal organizations rather than nonviolent, low-level offenders.

via Call Off the Global Drug War – NYTimes.com.

One of the greatest threats to the USs ability to innovate lies within: specifically, with the music and movie business. These Big Content businesses are attempting to protect themselves from change so aggressively that they risk damaging Americas position as a world leader in innovation.

I was looking for an easy to implement method to prompt for user ratings of my apps and found a great method here: Appirater.

The goal of Appirater is to encourage your satisfied user’s to rate your app. To use it, place the Appirater code into your project, and add the following code in your app’s delegate class.

p.s. yes the name sucks but the code is great.

Cellphones on a Plane

Interesting, but I’m all for banning cellphones so I don’t need to listen to some ass talk at the top of his voice so everyone knows about his golf outings and how awesome he is. You know there would be one on every flight.

A report by the International Air Transport Association, a trade group representing more 230 passenger and cargo airlines worldwide, documents 75 separate incidents of possible electronic interference that airline pilots and other crew members believed were linked to mobile phones and other electronic devices. The report covers the years 2003 to 2009 and is based on survey responses from 125 airlines that account for a quarter of the worlds air traffic.

via Is It Really Safe to Use a Cellphone on a Plane? – ABC News. 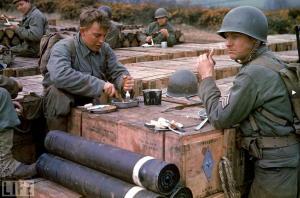 Today is the 67th anniversary of D-Day. Some great color photos from LIFE.

Before and After D-Day: In Color – Photo Gallery – LIFE.

LocaDo 1.1 Submitted to The AppStore

I submitted LocaDo 1.1 to the app store this weekend and wanted to give a sneak peak. New features include:

Get v1.o here: LocaDo, location based to do list and reminders for iOS.

Apple isn’t providing video this year so here’s a collection of publications covering it on their sites.  “F$&k it, we’ll do it live!”

Learning a new programming language can be difficult and sometimes developer documentation just doesn’t convey the message clearly and you need an example.  Coming from PHP where every function is documented with example code, I feel this is one area where the Objective-C ecosystem is severely lacking.  I found iPhone SDK Examples to be a helpful resource.

I can’t think of anything that could possibly go wrong with this.

Planning a sojourn in the northeastern United States? You could soon be taking part in a novel security programme that can supposedly ‘sense’ whether you are planning to commit a crime.